- It is a process that a metal returns to the state of an ore that is a stable oxidized compound in nature.

As the process of a complicated ore being refined into a metal requires much energy, rusting develops fast.

Rust is an electrochemical process.

As an extremely small quantity of electrolytes (oxygen, water, pollutant, etc.) exist on a metallic surface with no protective film, electrons are induced to move from a high-level area (anode) to a low-level area (cathode), resulting in rust.

When a rust cause is stuck on a metallic surface. it rusts immediately.

This is because water penetrates into the crystallized part of a metallic oxidized film and causes the metal to melt. 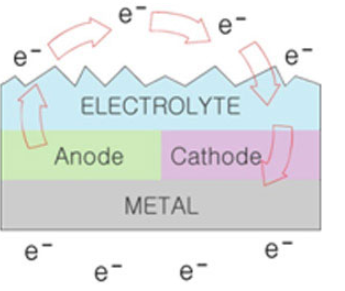 - The Volatile Corrosion Inhibitor, which prevents a metal from rusting, is widely known as the "VC1".

The VCI is a compound of materials easily sublimated or evaporated at room temperature.

Once evaporated, particles form a monolayer on the metallic surface and hinders the mechanism of the initial stage of corrosion as electrodes of the metal are prevented from flowing from the anode to the cathode.

VCI particles form a protective layer as thin as 1 molecule, which adheres to the metallic surface.

Metallic ions that are formed this way no longer react on water or oxygen.